Invested in our Community 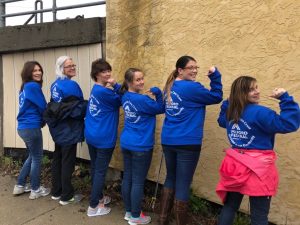 As a community bank, Milford Federal believes that giving back to the neighborhoods and communities in which we do business is of utmost importance. We support not only broad-based and global charities such as United Way and March of Dimes by holding bank-wide fundraising drives – we also support many locally-based programs such as youth and senior centers and food pantries. Each year we award college scholarships to high school seniors from numerous area schools and Milford Federal is an active member in three area chambers of commerce. In addition, we’re on the Honor Roll of institutions participating in the American Bankers Association’s Teach Children to Save program, where we speak to local elementary school classes to help kids understand the importance of saving and how it can positively impact their lives. We’re proud to say our employees exhibit a strong commitment to charitable giving and community outreach as well, through youth sports coaching, serving as Directors on various boards, choreographing and directing children’s plays; Lion’s Club, women’s clubs and Rotary memberships – Milford Federal employees are out in our communities, getting involved and helping others. We believe in the importance of being a good corporate citizen and are committed to continually seeking out new ways in which to demonstrate that responsibility, throughout the communities we serve. “No act of kindness, no matter how small, is ever wasted.” – Aesop

The Milford Federal scholarship program has awarded $10,000 annually, for over 10 years. Each school selected a scholarship recipient based on need, academic standing, and involvement in school and extracurricular activities.

Sponsored by Milford Federal Bank and run by PTO volunteers, the national SchoolSavings.com school banking program has been offered at Leo A. Savoie Elementary for the past nine years. Each Tuesday throughout the school year, bankers head to the technology room where parent volunteers receive and record their weekly deposit, which later in the day is dropped off at Milford Federal’s Woonsocket branch and credited to the students’ individual accounts. If you know an area school that may be interested in participating in the SchoolSavings.com banking program, please call 401.765.2900.

Milford Federal Bank has donated $5,000 to the community rejuvenation of Draper Memorial Park. Donations made through this initiative will be used to transform Draper Park through repairs to the General Draper statue and brick pathways, as well as the installation of new lighting, landscaping, irrigation, seating, and historical signage.

“Milford Federal Bank is proud to join in the rejuvenation initiative for the improvement of Draper Memorial Park,” said Paul Gilbody, CEO Milford Federal Bank. “As part of our responsibility to be good corporate citizens, we are committed to improving the communities where our employees and customers call home.”

Draper Memorial Park occupies a triangle of land in the downtown Milford area, located at the intersection of Congress Street and Main Street. The park features monuments that list the names of veterans who served during World War II, the Korean War, and the Vietnam War. Standing tall in the park is the statue of General William Franklin Draper by sculptor Daniel Chester French, whose work also includes the massive marble statue of Abraham Lincoln in the Lincoln Memorial in Washington, D.C. The care and management of Draper Memorial Park falls under the authority of the Milford Parks Commission and Milford Veterans Services.

Donations can be made easily online by visiting Patronicity.com/milford. Individuals or businesses who prefer to write a check can do so by writing it to “Town of Milford” and writing “Draper Park Revitalization” in the memo. Checks should be mailed to the Treasurer’s office at Milford Town Hall, 52 Main Street, Milford, Massachusetts 01757.

From time to time, we provide links to other websites for the use of our visitors, which have been compiled from internal and external sources. By clicking “Continue” below, you will be opening a new browser window and leaving our website. Although we have reviewed the website prior to creating the link, we are not responsible for the content of the sites.

Information on linked website pages may become dated or change without notice, and we do not represent or warrant that information contained on these linked pages are complete or accurate. We suggest that you always verify information obtained from linked websites before you act upon such information.

The privacy policy of this bank does not apply to the website you visit. We suggest that you always verify information obtained from linked websites before you act upon such information.

E-mail is not necessarily secure against interception. If your communication is very sensitive,
or includes personal information such as your account numbers, credit card number or social security number, you may want to call us, send it through the U.S. Post Office, or use our
Secure Contact Us Form.